In the months following the Joint U.S, French, and British attack against the Assad regime’s chemical weapons facilities it has become clear that Syrian air defenses failed to meaningfully degrade the limited strike.

Assad was either incapable or unwilling to engage coalition with his air defense systems. He sent his fighter aircraft away from Syria before the strike and his missiles engaged only after weapons fired from coalition aircraft had impacted their targets. The missiles were not guided as Coalition forces did not detect any lock-on, reporting that 40 Syrian missiles were “fired at nothing” following the airstrikes.

Russia has continued to claim without evidence that 71 missiles were intercepted by Syrian Air Defense while the Pentagon holds that no missiles or aircraft were engaged successfully.

Russian media went on the claim the Pantsir S1 showed “almost 100 % effectiveness” yet goes on to claim that the sites struck were not protected by air defenses.

Here you can see satellite photographs of two of the target zones hit by the strike. In these photos, one can clearly see the effect of multiple impacts on several different buildings. Some buildings are no longer standing and others are hollowed out. 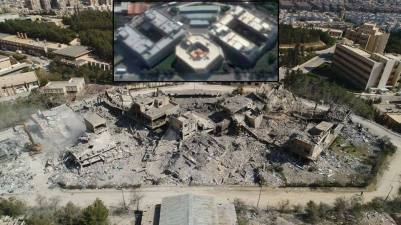 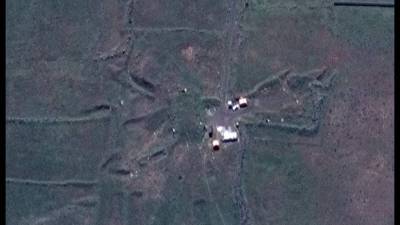 In this video of the strike (shot in Damascus), it’s clear that Syrian Air Defense did not effectively respond to the salvo of cruise missiles. At time mark 1:10 you can see several dozen cruise missile hit their targets in a very short period of time.

The intercept ratios the Russians are putting out also casts doubt on the veracity of their claims. Russian state news agency Tass claimed that the Syrians managed to down 71 missiles using a combination of 112 mismatched interceptors ranging from the 1960s vintage S-125 to the Strela-10 (a Stinger equivalent, sometimes mounted in pods on armored vehicles).

The success of either of these systems is unlikely because their age, design intent and the conditions they were operating in. The S-125 and S-200 for example were are not designed to hit low flying targets like cruise missiles and Strela is more suited to slow-moving targets like helicopters.

The ratio of hits is also unusually high( like Putin’s numbers during the last election). Western nations often fire at two to four interceptors to ensure target destruction, Syria is claiming that it’s dated air defense systems managed to achieve an 80% hit ratio firing less than two interceptors per missile, at midnight using air defense systems from the 1960s.

No video evidence of interceptions or crashed American missiles has surfaced either. The only videos we have are of dozens of allied missiles impacting Damascus.

Pictorial evidence also points to a complete failure of Syrian Air Defense. One photo seems to show interceptors being fired at a 45-degree angle and continuing skyward. While this would match an intercept trajectory for a bomber or fighter flying at high altitude, it doesn’t add up when you are trying to intercept a cruise missile designed to hug the ground.

Given the extensive damage, one can only conclude that even if the Syrians did manage to engage American missiles, the response was completely ineffective. All three targets were hit multiple times and many of the buildings were completely demolished. Those left standing look to be hollowed out.

The lying on the Regime is understandable. The Regime needs the propaganda to keep itself going. It has a well-known tendency to exaggerate numbers. It has claimed absurd success rates against Israeli aircraft and missiles despite having only a single confirmed kill against the IAF in the last 36 years.

Just a few weeks ago they the regime declared that it had intercepted nine Israeli missiles, only to redact the claim when it was relieved that there were no missiles and the regimes sensors had malfunctioned.

I believe Russia’s interest in perpetuating this lie is two-fold. First, Russia’s defense industry is vital for the functioning of the Russian state. They need to be able to sell weapons. The Russians then, are attempting to cover up just how badly outmatched some of their air defense systems were by legacy American, British and French aircraft using new missiles.

Second, the operational success of the American strike threatens Russia’s own conventional deterrence. Some systems like the Pantsir S1 are still in service with the Russian military, as are the Buk missile systems. The failure of these systems against a well tried, (even cliche) American mode of attack is not only embarrassing but undermines their conventional deterrence vis-a-vis NATO, which would be able to generate much more firepower in a war against Russia.

Add insult to injury, the Pentagon has claimed no stealth aircraft took part in the business end of the strike and that EA-6B Growlers provided electronic warfare support. B-1B Lancers, and French Typhoons, and British GR4 Tornados delivered all airborne munitions with F-22s sitting back to protect troops against possible retaliation.

When you add it all up it paints a dire picture for Russian air defense. Not even their propagandists have claimed that any of their legacy systems actually engaged an allied aircraft. With strike ranges on the order of 370 km for the JASSM and 1600 km for the TLAM. Allied aircraft and ships would be outside the range of even the S-400 air defense systems and most almost all anti-ship missiles.

In a war over the inability of the Russian made air defense systems to mitigate an American missile attack, let alone engage the airplanes that launched them poses a significant problem for the Russians. Supposedly, the S-300 would do better, but there a fewer of them and the capacity of the force has limits, especially when you consider that a full-scale attack would involve several hundred missiles. The invasion of Iraq involved 802 tomahawks alone.